The Anatomy of Door Locks

When you think of locks, traditional door locks are probably what comes to mind. These locks have a keyhole and a manual latch. This description makes door locks seem simple and plain, but they are actually much more complex than what meets the eye. A little research to better understand how each part works can help you fix lock problems on your own and reduce calls to your local emergency locksmith in Houston, TX. Below is an overview of the parts of a door lock and how they work.

Many residential homes, apartments, schools, libraries, small commercial buildings and other similar spaces still use traditional key-and-doorknob locks for both interior and exterior doors. Traditional locks, also known as mechanical locks, while still popular today, are not the only type of lock available. Homeowners and business owners can also choose from different types of electronic locks, many of which are widely available and affordable. These types of locks use electricity and small motorized components instead of the parts found inside traditional locks.

Recently, lock manufacturers have taken to incorporating smart technology into their electronic locks. Smartphone use or voice control are more advanced ways of opening a door that omit the need for a key.

At Express Locksmith Houston, we strive to take care of all of our client’s needs. We know that you probably have questions about the services we provide. That is why we have put together a frequently asked questions (FAQ) page to help you understand our services. Some of the most common questions we get asked include:

What Are the Parts of a Door Lock Called?

Some of the most important parts of a lock include:

The Cylinder: Also called the body, this is the part where the key is inserted. When it is locked, a series of spring-loaded pins are engaged by the cylinder. This keeps the cylinder from turning.

The Bolt: Also called the latch, the bolt engages the inside of the door. There is a piece of metal that extends from the door into the frame itself. This bolt is used to hold it closed.

The Box:The bolt extends from the cylinder into a hole that is designed to fit the bolt perfectly. This is called the box. The box is meant to hold the bolt in place when it is locked. This prevents it from being pulled open.

These are the most important parts. Each part plays an important role in making sure it functions as designed.

What Are the Parts of a Key Called?

The majority of keys are made up of small pieces of metal that are used to disengage a lock that might be in place. In general, there are two parts to most keys. The first part is called the bit or the blade. This slides into the lock itself. Locks are shaped to distinguish between various keys so that it only unlocks for the right key.

The second part of the key is called the bow. This is the part that protrudes from the locking mechanism when the key is in place. This allows the user to provide torque to unlock and open. In this manner, the key acts as a security token, allowing users to gain access to specific areas. 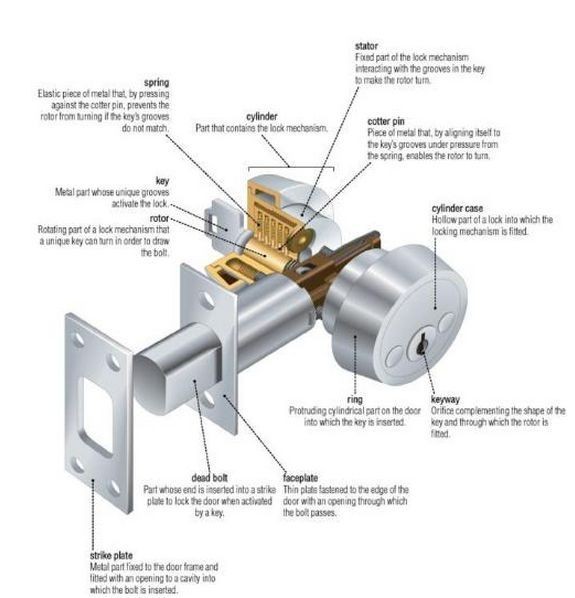 What Are the Parts of a Deadbolt?

Some of the most important parts of a deadbolt include:

The Actual Bolt: The actual deadbolt itself is a small piece of metal that extends from the door and into the frame. It locks with the frame to prevent someone from opening from the outside.

The Thumb Latch: This is the part of the deadbolt that extends from the surface. This allows the user to rotate and unlock the deadbolt from the inside.

The Turnpiece: Also called the tailpiece, this is the part of the locking mechanism that extends through the door from the cylinder on the outer key. The thumb latch connects to this piece of the deadbolt allowing the user to operate the lock.

The Keyhole: The Keyhole itself is where the key inserts, allowing users to operate the lock.
These are a few of the most important parts of the deadbolt. Each part plays a role in how the locking mechanism works.

What Is a Door Strike Plate? 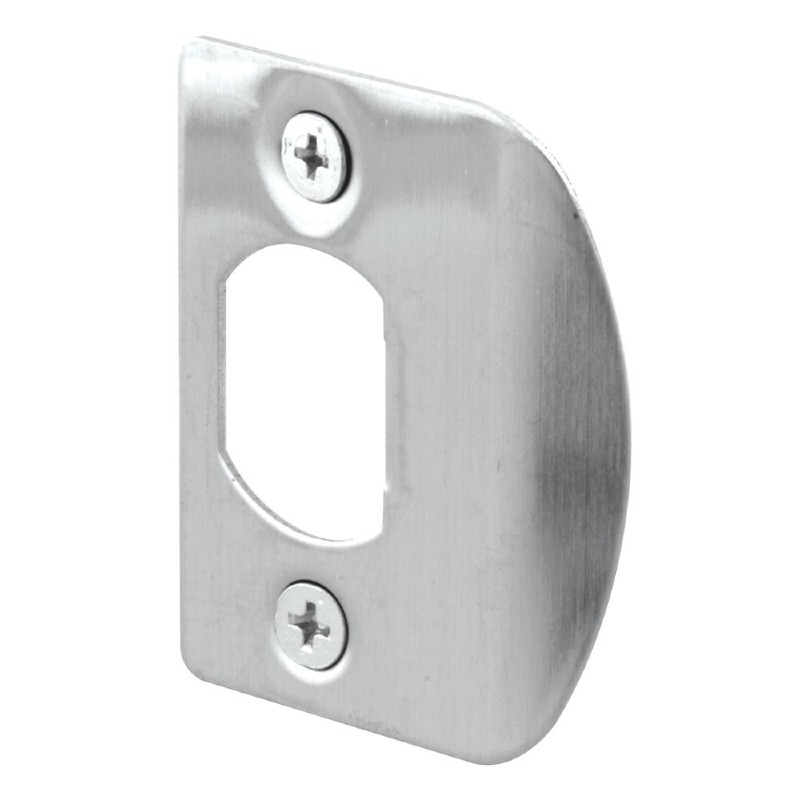 What Is the Plate Behind a Door Knob Called?

The plate behind the door can refer to two separate pieces of metal. The first option is the strike plate, which is discussed above. The strike plate keeps the bolt in place when it is locked. When it closes, the latch strikes the plate and holds it closed.

The other option could be the rosette. This is a plate that is located behind the knobs. The rosette is meant to hold the doorknob in place and prevent it from rattling when the knob is turned. In this manner, the rosette plate adds an extra layer of security and increases the durability of the doorknob.

If you would like to learn more about how we can help you with all of your lock needs, contact us today! Our trained professionals are always standing by to help you answer all of your questions or concerns. We look forward to meeting you!
[the_ad id=”1349″]